The Time of Angels…

Posted by trespasser58 on August 3, 2012 in Amy and the Eleventh 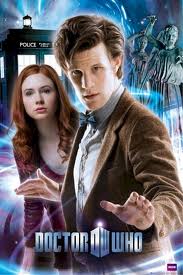 Series 5, episodes 4 & 5; ‘The Time of Angels’ and ‘Flesh and Stone’ bring us face to face (again) with the Weeping Angels; ‘the deadliest, most powerful, most malevolent life form evolution has ever produced’, says the Doctor to Amy Pond.

They have rescued Professor River Song, beaming her on board the TARDIS from another spaceship. River needed the TARDIS (well she needed the Doctor too) to pursue that Star Ship, the ‘Byzantium’ because, ‘There’s a thing in the belly of that ship that can’t ever die.’

After River gives the Doctor a lesson in TARDIS control (the blue switches are the stabilizers and it only makes that noise because you leave the brakes on) they find themselves on Alfava Metraxis, the seventh planet of the Dundra System (oxygen-rich atmosphere, toxins in the soft band, 11-hour day, and chances of rain later).

But what about these ‘Weeping Angels’?

In ‘Blink’, (3: 10), we learned that, ‘They’re not weeping; they can’t risk looking at each other. Their greatest asset is their greatest curse. They can never be seen; the loneliest creatures in the universe. That’s why they cover their eyes,’ (for, when seen by any living thing, even each other, they turn to stone; as a means of self defense).

But do genuine angels ever weep? I don’t know. I do know that they enjoy a celebration; ‘In the same way, I tell you, there is rejoicing in the presence of the angels of God over one sinner who repents.” Luke 15:10.

In ‘Flesh and Stone’, Amy is in trouble (again) because she stared too long at a Weeping Angel. Now there is one inside her mind and it’s making her count down to the time when it will destroy her (for fun, says ‘Angel Bob’ a.k.a. ‘Sacred Bob’ a.k.a. ‘Scared Bob’). What will the Doctor do? Can River help?

While River and the Doctor are working to repair the Byzantium for their escape, Amy is alone in the forest (yes, a forest on a space ship) with her eyes closed as the only means of keeping the Angels at bay. How will she find her way to the Byzantium and safety?

The Doctor fixes her up with a locator device but the forest is full of angels and then there is the added danger from the ‘Time Energy’ that is still following Amy through the crack in her bedroom wall (really) and even the Weeping Angels are worried about that.

What is the Doctor’s helpful advice to Amy in her time of need?

‘You’re going to have to walk like you can see.’

‘If the Time Energy catches up with you, you’ll never have been born. It will erase every moment of your existence. You will never have lived at all.’

Just as well River has successfully repaired the teleport device on the Byzantium then; so she can pluck Amy from the claws, teeth etc of the angels just in the nick of time (ha! never thought I’d be game to actually say that did you?)

‘You’re going to have to walk like you can see,’ was better advice than it sounded to Amy at the time.

It is good advice to us too; ‘for we walk by faith, not by sight,’ as the Apostle Paul told the troubled Christians in the ancient city of Corinth. 2 Corinthians 5:6 NRSV

This ‘walking’ has to do with the way we live; our ‘walk’ of  life, the day by day, hour by hour, experience of our life; and in our most difficult circumstances, like those early Christians, (like Amy Pond ?) often we can see no way out and so must continue to walk (as we always must) by faith.

Just as well that someone is working on this with us.

‘And we know that in all things God works for the good of those who love him, who have been called according to his purpose.’ Romans 8:28

Just as well that this remains true whatever our struggle may involve (even angels).

35 Who shall separate us from the love of Christ? Shall trouble or hardship or persecution or famine or nakedness or danger or sword? 36 As it is written: “For your sake we face death all day long; we are considered as sheep to be slaughtered.” No, in all these things we are more than conquerors through him who loved us. 38 For I am convinced that neither death nor life, neither angels nor demons, neither the present nor the future, nor any powers, 39 neither height nor depth, nor anything else in all creation, will be able to separate us from the love of God that is in Christ Jesus our Lord.’

← How much does the Doctor love his daughter?
The Vampires of Venice →