Unveiling the One True Time Lord
Leave a comment

Vincent and the Doctor

In this thoughtful and touching episode (5:10) the Doctor and Amy meet Vincent Van Gogh, ‘Certainly, the most popular, great painter of all time, the most beloved,’ says  Doctor Black of the Musee D’Orsay in Paris.

But it is the face revealed in the window of the ‘The Church at Auvers’ , Van Gogh’s painting, which takes the Doctor’s attention; ‘Yes. And not a nice face at all. I know evil when I see it and I see it in that window.’

Well, he would change his mind later, I think.

Now, the Doctor and eager Amy (Rory is still forgotten to her, never having existed at all) arrive in France in 1890 around the 1st of June finding Vincent as he is offering a self portrait, ‘one painting for one drink’, to an innkeeper who refuses. After Vincent turns down the Doctor’s offer to buy his painting Amy resolves the matter, buying a bottle of wine to share with ‘whomever I like’ and she likes Vincent.

That face in the window belongs to the Krafayis, an alien creature,’utterly merciless, utterly abandoned’ set on killing until it is itself killed.

Strangely, or perhaps not, the creature is invisible to all eyes but Vincent’s, the eyes not only of an artist but of this man that others call ‘mad’. He says,’Look around. Art. It seems to me there’s so much more to the world than the average eye is allowed to see. I believe, if you look hard, there are more wonders in this universe than you could ever have dreamed of.’ The Doctor agrees but for Vincent there is more; ‘It’s colour. Colour that holds the key. I can hear the colours. Listen to them. Every time I step outside, I feel nature is shouting at me. “Come on. Come and get me. Come on. Come on! Capture my mystery!’

Relying on Vincent’s sight the Doctor confronts the ‘monster’ but it is Vincent who is left to kill it, to his regret;

‘He (the Krafayis) wasn’t without mercy at all. He was without sight. I didn’t mean that to happen. I only meant to wound it, I never meant to… He was frightened…and he lashed out. Like humans, who lash out when they’re frightened. Like the villagers who scream at me. Like the children who throw stones at me.’

‘Doctor, my friend,’ Vincent will say later, ‘we have fought monsters together and we have won. On my own, I fear I may not do as well.’

What about this ability to see and hear what others cannot? Does it depend on ‘madness’? And would, could, Van Gogh have been the artist he became if he was not mad? Would Beethoven have become the composer he became if not for his deafness? Possibly, or not, but regardless there is a strong argument here for appreciating the outcasts of our world.

Sometimes it’s a matter of ‘revelation’ that we see what others can’t, but are we listening? Are we looking? Can we see the world, can we see God, even if we are looking?

Jesus said to his disciples, ‘For this people’s heart has become calloused; they hardly hear with their ears, and they have closed their eyes. Otherwise they might see with their eyes, hear with their ears, understand with their hearts and turn, and I would heal them. But blessed are your eyes because they see, and your ears because they hear. For I tell you the truth, many prophets and righteous men longed to see what you see but did not see it, and to hear what you hear but did not hear it.’ Matthew 13:15-17. 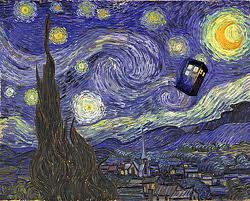 When, by the Grace of God, we do hear and see him and our hearts and minds are opened as well as our eyes and ears, what will happen?

The risen Jesus says, ‘Here I am! I stand at the door and knock. If anyone hears my voice and opens the door, I will come in and eat with him, and he with me.’