The name of the Doctor – such a promise!

Posted by sevennotesofgrace on June 9, 2013 in Clara and the Eleventh, Finding Christ in popular culture, Timey Wimey stuff 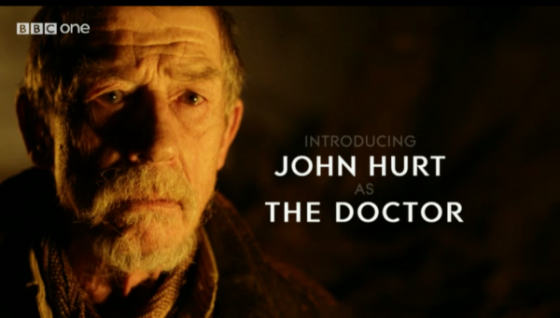 Clara: Who’s that?
Doctor: That’s me
Clara: But I never saw that one…
Doctor: I said he was me. I didn’t say he was the Doctor… The name I chose is the Doctor. The name you choose, is like a promise you make… He is my secret.
John Hurt: What I did, I did without choice, for the name of peace and sanity.
Doctor: But not in the name of the Doctor.

I love this line tucked away in the last few minutes of the season finale: “The name you choose is like a promise you make”. In our culture the title ‘doctor’ signifies intelligence and knowledge, wisdom, the ability and willingness to fix and heal, to solve problems, to help others. And though our Doctor’s real name (thankfully) remains hidden, he says he chose this ‘name’ by which to be known. Doctor. Not doctor something, simply Doctor.
Herein lies his promise to the human race, and even more broadly, the Universe. Whenever we need healing or rescue, or protection, the Doctor will show up. He will prevent and/or remedy problems in the universe. He will heal wounds in the fabric of time, often at great personal cost and pain. This is his promise, the promise wrapped up in his name.

We don’t get to choose our own names. If we did I’m sure you, like me, would choose something that simply pleased yourself, something which sounded nice or cool. But the Doctor chose a name which embodied the promise to help, always.

This is not the first time a Lord of time has chosen a name with significant meaning. Our God gave himself the name “I am” (Yahweh) from the burning bush in Exodus 3. Such a name gave Moses the understanding that this God is faithful and dependable, unchanging. In giving His name, God gave himself in promise to the Israelites, His chosen people. He would be their God and they would be His people. (Read more in the post “You are I AM”)

Jesus also referred to himself as ‘I am…..’ seven times in fact. These words carried the same weight of promise as did God’s description of himself to Moses. (You can read about the seven times Jesus called himself I AM….Bread of Life, Light of the World etc, over at Sermons and Soda Water)

The name Jesus also comes with a promise: Jesus’ Hebrew name is Yeshua, which is a shortened version of Yehoshua. Yeshua means ‘He will save’, and is translated into English as Joshua.

Yet Jesus is also the Christ. This is not a surname (‘Mr J. Christ’) but a title which points to the fulfillment of God’s great promise to King David (2 Samuel 7), that a King would come in His line and rule in righteousness forever.

Jesus’ favourite title for himself, Son of Man, is explained here in a post about the Titles of Christ. This Son of Man was promised long ago (Daniel 7), as the one who would be victorious over evil and receive the Kingdom of God in the New Age. This is what Christ has done, he has received the Kingdom from the Father, through the power of the Resurrection.
The true Time Lord has made good all these promises wrapped up in His name. And add to all this the great assurance that He is with us always: “never will I leave you!” (Hebrews 13:5)

We trust that this Doctor will keep on making good the promise of his name, for the sake of a great adventure.

And finally, getting back to that mysterious doctor played by John Hurt, some suggest his character maybe a reference of the Valeyard:  “The Valeyard was revealed to be a future version of the Doctor. Or rather a physical distortion of the Doctor’s darker side, manifested between the Doctor’s twelfth and thirteenth regenerations as a bloke in dark clothes.” (read more) We have see this darker side before, in the mysterious Dream Lord of Amy’s Choice.

Whoever he is, we do know he did not act in the name of the Doctor. We must wait patiently for the promise of the Season finale to be fulfilled!

The author musing here about music, grace and God goes by the name of Ros. I have a husband (married 27 yrs) and three daughters. I've been many things over the years, particularly a mother, high school teacher, church music director and women's ministry co-ordinator. Now I'm back to teaching high school English full-time. All these experiences have come to me from God's gracious hand, and each day I try to remember that! I live in a home among many gum trees in Brisbane Australia. Our extended family includes a white Maremma dog named Mia, two kittens, Simon and Catniss, and one chickens. Why “seven notes of grace”? The grace refers to God’s grace, which He offers to unworthy people like myself. We can freely receive His forgiveness and love. Music is another gracious gift to us: our ability to create, play, sing, communicate with and enjoy it. So the seven refers to the seven notes of the musical scale (yes there are seven, count them A to G) and the notes refers to writing (text and music) and musical notes. I was very relieved when this original blog title finally came to me, which encapsulates so many different aspects of who I am, a musical sinner saved by grace! http://sevennotesofgrace.com/

← Missing the Doctor…
An Ode to the Universe →

4 comments on “The name of the Doctor – such a promise!”